The Congregation for the Doctrine of the Faith has issued a Decree of Erection which officially founds an ordinariate in England and Wales. It will be known as the Personal Ordinariate of Our Lady of Walsingham, under the protection of Blessed John Henry Newman. The Ordinary, or head, of the ordinariate will be Fr Keith Newton. 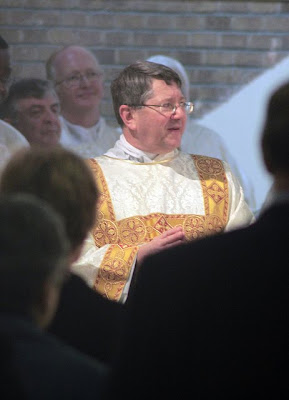 On Thursday three former Anglican bishops – Keith Newton, Andrew Burnham and John Broadhurst – were incardinated into the English and Welsh ordinariate when they were ordained deacons at Allen Hall seminary in London. They were ordained priests this morning at Westminster Cathedral...

Read the full story in The Catholic Herald.

Rocco Palma also covers the story, with the full text of the decree from the Congregation for the Doctrine of the Faith, in his story "Walsingham: The Ordinariate Begins" at Whispers in the Loggia.
Posted by Steve Cavanaugh at 4:30 AM