The ordinariate is happening, at an unprecedented pace

The speed of the operation is possible because of the Pope’s personal knowledge of those involved
Wednesday, 5 January 2011
By WILLIAM ODDIE 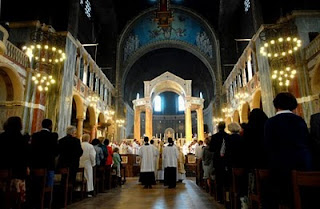 The English ordinariate, it seems, will be well on its way by the middle of this month. Three former Anglican bishops were received into full communion with the Catholic Church during a Mass at Westminster Cathedral on January 1. One of the comments following the Herald online report, noting that they were received in secular clothing, opines that “For Bishops to wear ties is simply saintly and to lose all that prestige they once held is stunning to the mind of a Catholic Bishop”.

Well, indeed. But I think that their former prestige is the least important aspect of what they are giving up: they are abandoning certainty and recognition within an established institution, for uncertainty within an institution – the ordinariate – that doesn’t even exist yet. What this shows is an absolute faith in the Catholic Church of which it will be a part, especially as it is embodied by the present Holy Father...

Read the rest at the web site of The Catholic Herald.

Hat tip to Fr. Phillips writing on the Anglo-Catholic blog.
Posted by Steve Cavanaugh at 5:49 AM